Deuces Wild Video Poker Games Are Not All Played the Same

There are dozens of different Deuces Wild (DW) pay schedules in various jurisdictions. Each one is played a little bit differently. Some of the most basic plays are played WAY different in different pay schedules. Today, let’s look at an easy way to keep this straight while you play at the casino.

If you compare the pay schedules line for line, you’ll see there are five pay schedule categories where the games are exactly the same, and five other ones where they are not. This is far too complicated to figure out in your head. How do you make sense out of this?

For purposes of giving dollars-and-cents amounts to playing various hands incorrectly, I’m going to assume we are playing both games for dollars, five coins at a time. 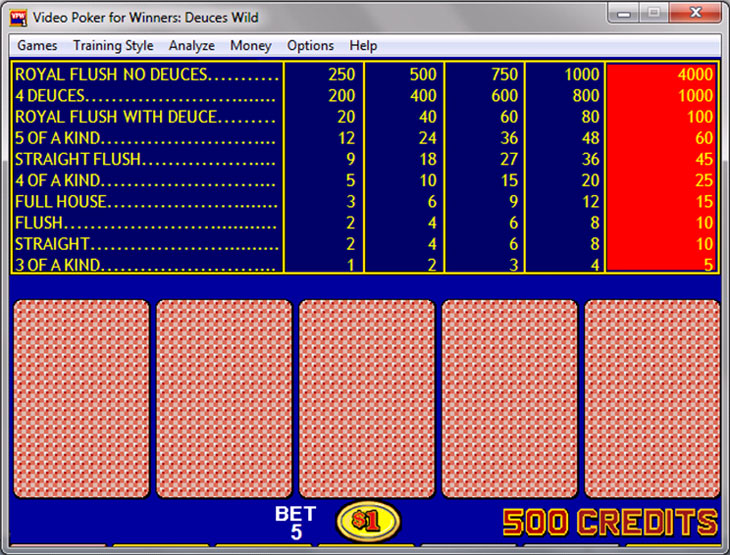 When full houses pay 4-for-1, the correct play is holding both pairs. AA55 is worth 66¢ than just holding one pair.

It’s surprising to many beginning players that AA isn’t worth more than 55 (in either game.) Remember, it takes 3 of a Kind to get your money back. In many other video poker games, AA is worth a LOT more than 55. Not here.

Also, note that this is not about how often we complete the full house. In both games you have eight cards that give you the full house (two more aces, two more fives, and four deuces). But in the first game it’s worth $20 when you get one of these eight cards and in the second it’s only worth $15.

When flushes return 2-for-1, you hold pairs over these same 4-card flushes. In the second game, AA is worth 23¢ more than AK85.

There are three different ace-low 3-card straight flushes, e.g. A34, A35, and A45. In other games we would also include A23, A24, and A25 on this list, but here we don’t do that because the two is actually a deuce and substitutes for any card.

In each individual DW game, a suited KQ, KJ, and K10 are worth the same amount. This is surprising news to players who come from a background of playing Double Double Bonus or other video poker games. (In that game KQ and KJ are worth the same, and K10 is worth a lot less.)

With our particular pay schedules today, in our first pay schedule, holding KQ is correct by 2¢ and in our second pay schedule, throwing everything away is worth 11¢ more than keeping KQ.

Compared to the other types of hands shown today, this is the one with the greatest number of exceptions. It’s often a close play and all five cards are sometimes important in the decision.

SO WHICH ONE IS BETTER?

Sometimes it comes down to personal preference. The two pay schedules shown today have almost identical values. If both were found in the same casino, some players would choose one game and some the other.

But if one version paid 96% and another paid 99%, any player wanting to win will only play the higher-returning game.

You basically need video poker software to figure out which game returns more --- and then to practice that game until you’re ready to play proficiently. The pictures here are from Video Poker for Winners, which is the software I use most, but several products are suitable.

5 Easy Video Poker Tips That Every Casino Player Should Know